18 months ago I gave up a combination of Mailchimp, Moonclerk and Zapier and moved The Sizzle over to Substack. The dream was Substack would not only be an easy to manage all-in-one service, replacing the need for tediously maintaining links between three separate services, it would also provide a new way for an audience to find The Sizzle that might otherwise not have heard of it. That didn’t happen and in practice, I lost subscribers instead of gaining them.

The Sizzle is a paid newsletter, I don’t do free content. What I put out there every day is worth the measly $5 a month I charge for it. What worked well for me in the past was giving out a no strings attached free trial of The Sizzle for two weeks then asking people to pay if they want it to continue. Substack’s business model however is freemium content. You give away the bulk of your content to build an audience then upsell that audience with paid subscriber only content.

There’s nothing wrong with the freemium approach but I couldn’t figure out a way to translate what I do with The Sizzle to fit within that business model. I don’t want to give away the core product (daily emails with tech news) for free and try convince people to pay me for a long-form article or two a week. A huge chunk of the existing 700 subscribers would go, “sweet, what I was paying $5/m for is now free!” and cancel their paid subscriptions. There’s no way my long form content would engage enough new people to make up for that loss. Suddenly my business is no longer a tidy summary of tech news that people get value out of, it’s selling hot takes on tech. The market is flooded with free, high quality hot takes - paying for mine would be stupid.

What I did instead was keep The Sizzle’s daily emails for paid subscribers only and provide a weekly summary of The Sizzle on weekends for free subscribers. This was absolutely nowhere near as lucrative in attracting new paid subscribers as giving people the actual paid product. Check out this chart: 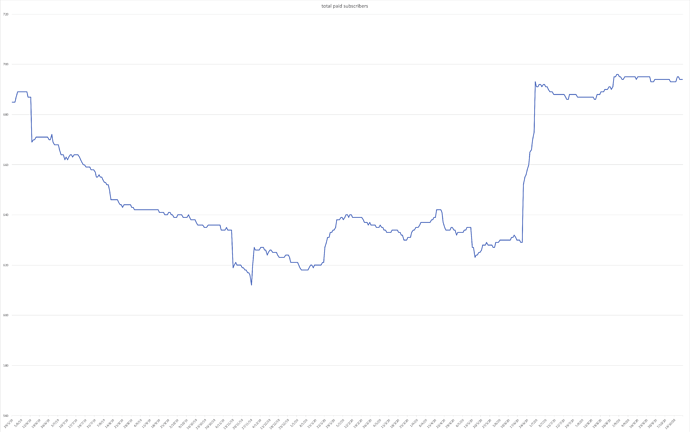 I imported 685 paid subscribers into Substack in May 2019. Today I have 694. In 18 months The Sizzle grew a pissweak 1.3%. That big bump in July is because of a promo I did for OzBargain’s 2020 birthday, giving away a hefty 20% discount to anyone signing up for a yearly paid subscription. That is not sustainable and really, all it did was bring me back to where I was prior to Substack.

I attribute the lack of paid subscriber growth to the fact people can’t see what The Sizzle actually is before paying for it with Substack. If they can’t see it, why would they buy it? The weekly newsletter is not a good representation of what The Sizzle is all about. I could add a 14-day free trial to the paid subscription, but Substack doesn’t do free trials without also adding a credit card and automatically charging that card when the trial is over. Most people hate this (me included) as they’re scared they’ll forget to cancel before the trial ends and get charged for something they don’t want, so they just don’t take the risk.

To get The Sizzle growing again I looked around for alternatives to Substack and found that none meet my unique needs, so going back to what I had before Substack was the best option. Learning from my mistakes, I’m using ActiveCampaign and Chargebee instead of Mailchimp and Moonclerk. It’s all still tied together with Zapier and a static HTML website that’s hosted on GitHub Pages.

People sign up for a trial at thesizzle.com.au, Zapier captures it and adds them into an automation on ActiveCampaign. That automation then sends a emails after certain time periods asking them to become a paid subscriber. Subscription modifications work in a similar fashion. The interaction of Zapier with the advanced automations in ActiveCampaign and the webhooks for almost every subscription action in Chargebee are super flexible and let me do what I need without a line of code.

Another upside of not using Substack is that I’ll be saving money. Substack’s 10% fee was pretty rough considering the lack of benefit I got from it. I’ll be cutting The Sizzle’s operating costs by half doing all myself. Not a big issue when you’re starting out, but when you get to some sort of scale, that 10% really adds up.

I don’t want to shit on Substack as it’s not a bad platform. Heapppsss of writers are finding success on it. Substack really is Kevin Kelly’s 1000 True Fans theory put into practice for those of us who write. I can easily imagine Substack introducing to a Netflix style arrangement one day where end users pay $20/m or something and can subscribe to a wide range of writers, with each writer paid a fee based on subscribers or views or something. Good luck to them! In the meantime, I’ll be out here on my own, sending my stupid little newsletter out every day and trying to forge a living out of it like I have for the past 5 years.