Facebook Marketplace is the biggest reason I still persist with Mark Zuckerberg’s panopticon because sometimes bargains pop up and being able to communicate with sellers in real time via Messenger is excellent compared to email. Marketplace is how I found my beloved Canon DR-6050C!

Whilst browsing Marketplace over the weekend for cheap shit I don’t really need but gives me a dopamine hit, I saw two brand new, unopened Brother ADS-2200 document scanners for $500. They sell for $398 each at Officeworks and I haggled the seller down to $300 for both. An absolute stone cold bargain. 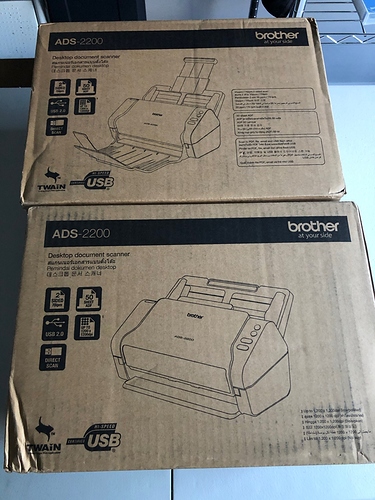 Unfortunately, after a few hours using one of them, I understand why the seller was so keen to get rid of them - Brother’s drivers are fucking rotten.

The ADS-2200 is a current model scanner you can buy new from Brother, has Windows 10 drivers available (albeit last updated in 2018) and the user manual has screenshots of the drivers showing all the nice options I want, so I assumed grabbing these scanners at $150 a pop was a safe bet. Unfortunately my optimistic assumptions (see: tape drives) have a habit of being torn to shreds in practice. 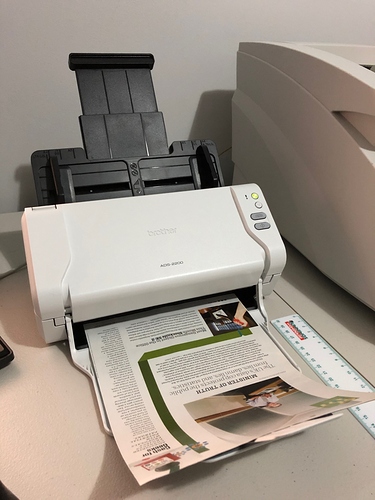 I grabbed the driver off Brother’s website, installed them on my Win10 box, fired up NAPS2 which saw the scanner as a TWAIN input source - excellent. Press scan to kick off a scanning session and nothing happens. NAPS2 blinks but the Brother settings page to select the scanning options doesn’t launch! Go back into the NAPS2 settings to select the scanner and it’s no longer listed. This is not a good start. 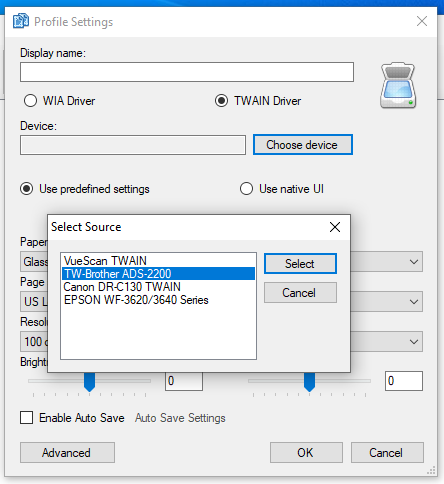 The scanner is still listed as a WIA device though. Okay, cool, the scanner works when using WIA but all the fancy options that are in the TWAIN driver simply aren’t there. Look at the difference in options with TWAIN vs WIA. I want the TWAIN driver damn you! 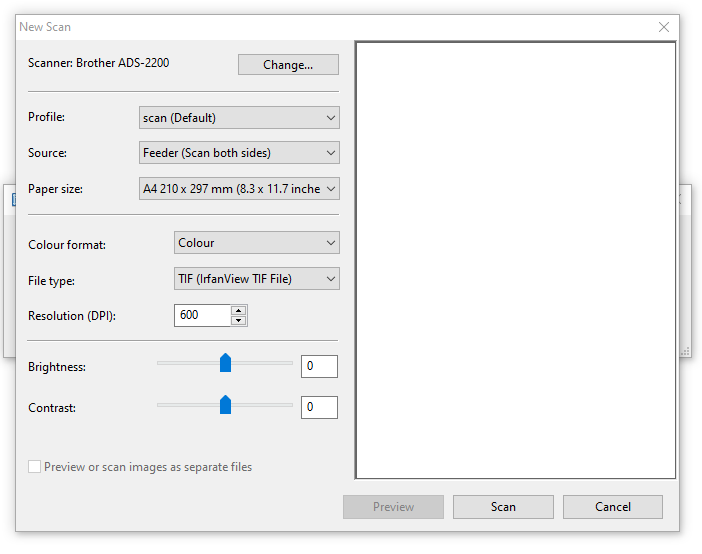 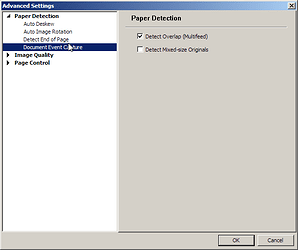 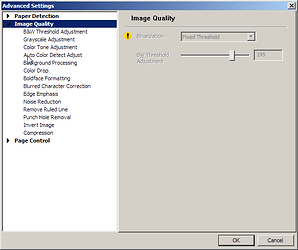 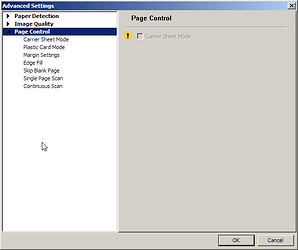 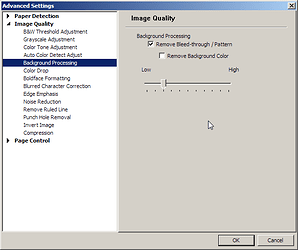 Rebooting the Win 10 box didn’t change anything and the same behaviour occurred. Maybe NAPS2 is to blame here? There’s various methods NAPS2 can use to address the TWAIN driver, but none of them made a difference. Brother has an app called “iPrint&Scan” available to download, so maybe using their app to access the scanner will yield more success? Kinda. As you can see in the screenshots below, there’s more options but not the same depth as the TWAIN driver. 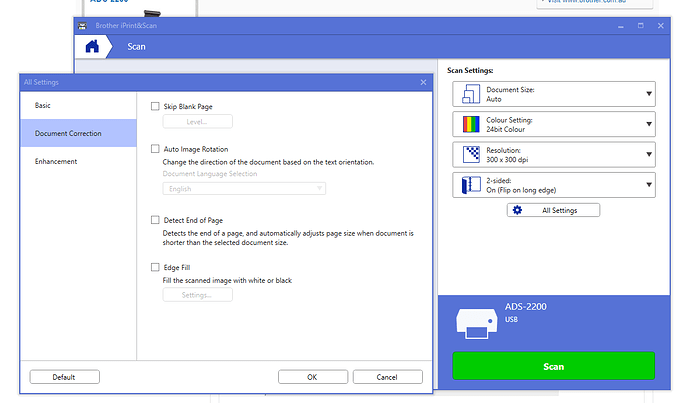 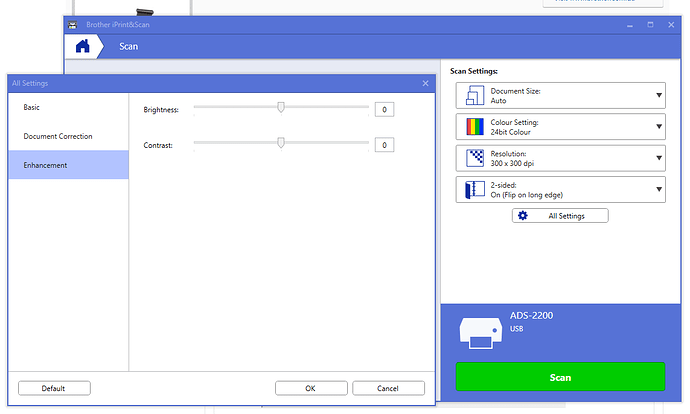 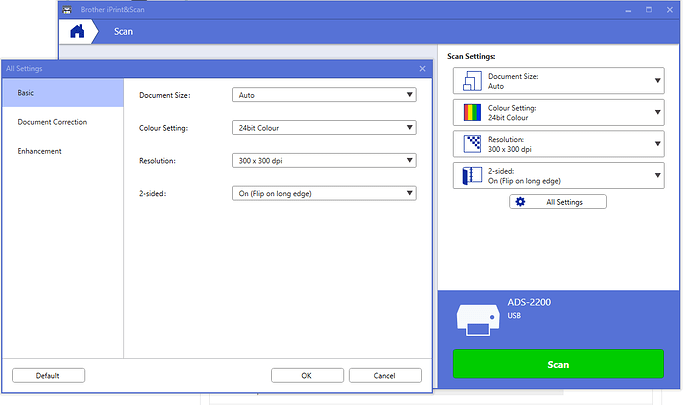 Maybe Brother are Mac fans and the Mac driver isn’t so ratshit, so I move the scanner to the iMac Pro which is still running macOS 10.14.6 (mostly because I can’t be fucked upgrading and a little because everyone reckons 10.15 is riddled with bugs). I can now tell you that Brother are not Mac fans and if anything, actively hate Apple and are probably glad Steve Jobs is dead.

The Mac ADS-2200 driver installs fine and iPrint&Scan is available on the Mac App Store, which is identical to the Windows version. It’s got more features than the WIA driver on Windows, but not the full compliment of settings as the TWAIN driver should. But unlike the Windows counterpart, the ADS-2200 just craps out after 3 pages. That’s right, it’ll suck three pages in and on the 4th just pause with the app shitting the bed after a minute. 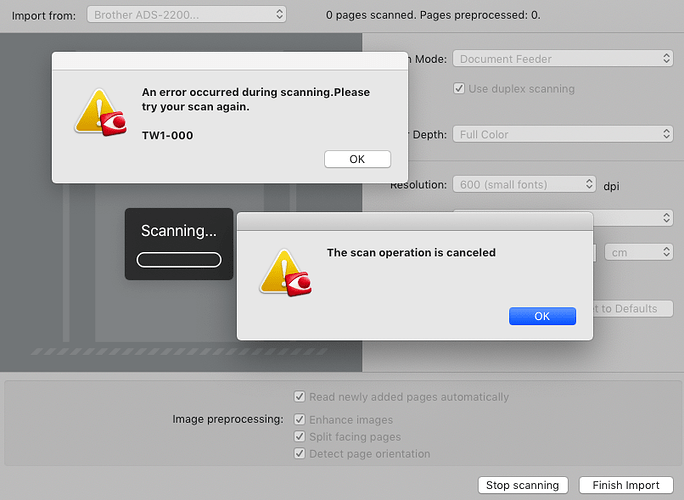 Err, ok that’s no good. What about if I use a different app, like the built-in Image Capture app? Nope, same thing. ABBYY FineReader? Ditto. Reboot doesn’t fix it. New USB cable didn’t fix it either. Oddly enough even running Win 10 in a VM on the Mac shows the exact same 3-page shit the bed behaviour. This didn’t happen on my Windows 10 PC, so I assume there’s something funky going on at a hardware level between the ADS-2200 and iMac Pro’s USB ports. I really couldn’t be fucked trying my wife’s iMac running macOS 10.13.whatever, but I still want to use this scanner as otherwise I’ve two $300 paperweights.

I installed Windows 7 on an old laptop, which is absurd as this scanner came out in 2017, many years into Windows 10’s life and towards the end of Window 7’s. Fuck me though, as the ADS-2200 works perfectly on Windows 7. NAPS2, TWAIN drivers, full options (that’s how I got the screenshots of the TWAIN driver I used earlier to compare it to the lame WIA ones). Use these scanners on Windows 7 and be done with it, right? Well yeah, but not really.

The ADS-2200’s quality kinda sucks, particularly the feature I wanted most - remove bleed-through. I had a bunch of example images, but I lost them moving this blog post across to a new platform, so you’ll just have to take my word for it that the ADS-2200 has below par image quality.

I thoroughly suggest that nobody pay RRP for the Brother ADS-2200. On Windows 10 you only get baby mode scanning options. On Mac the damn thing craps out after 3 pages and crashes. In Windows 7 (which you should have retired by now) it’ll work, but the image quality leaves a lot to be desired. I’m not sure what I’ll do with the ADS-2200 now. It’s annoying to keep a Win7 box around just for it and the quality isn’t that shit hot. I can’t really on-sell it either knowing how crappy it is, but if someone just wants to use it in basic mode on Windows it’s not that bad.