Polestar 2 vs Tesla Model 3, a meta-analysis 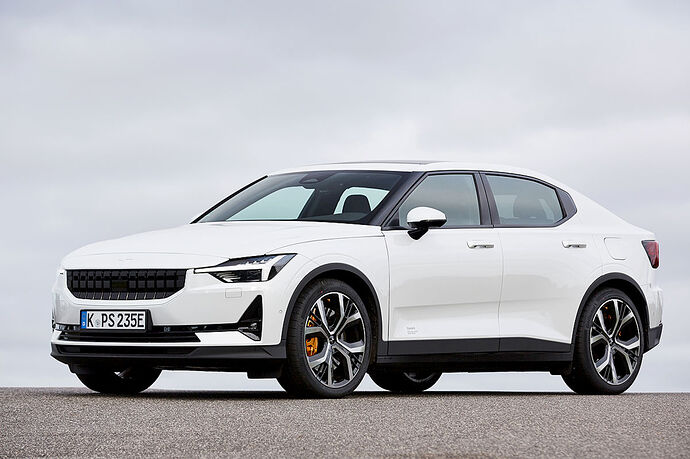 I’m semi in the market for a new EV as the Model 3 has let me down (will cover that in a separate post) and with the recent Tesla price hike, I could probably sell mine for what I paid for it and the new owner would still save money off a new one and not have to wait 6-9 months. 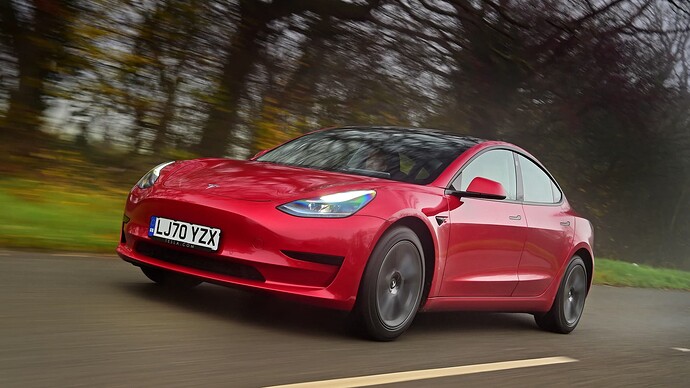 There are a raft of videos on YouTube comparing the Model 3 to the Polestar 2. Dunno why but everyone pitched it as a “Model 3 killer”, so of all the EVs out there, the Polestar 2 has the most head to head videos between it and the Model 3.

The Polestar 2 just went on sale in Australia and there’s a few “in-stock” for delivery in mid-April. I’ve got a test drive booked in so I can see for myself what the car is like to sit in and drive, but figured I’d see what the YouTubers reckon. Here’s what I found:

Electrica Live - “it’s better to drive, more practical, I think the Polestar is a better bet”

What Car? - “it’s only really on interior quality where it convincingly beats the Tesla, in all other areas the Model 3 has the upper hand”

AutoTrader - “faster, drivers better, better practicality, better charging network, ticks all the boxes you want not onliny in an electric car, but a good family car”

Michael Dunne - “The Tesla Model 3 is still king of hill, particularly when you take into account the Supercharger network”

AutoWeek - “I think the Tesla is a better car”

WhichEV - “the Polestar 2 runs the Model 3 really close, Polestar have done a great job on this car, but we’re still giving the win to the Tesla”

Throttle House - “strongly leaning towards the Polestar 2, chassis better controlled”, “due to access to Supercharger network (Model 3) is my choice”

Fully Charged - “it would be really hard to say no to one of these” (Model 3), “there’s nothing I don’t like about this car” (Polestar 2)

There’s more reviewers liking the Model 3, but they come with a bit of a caveat - the Supercharger network and price. 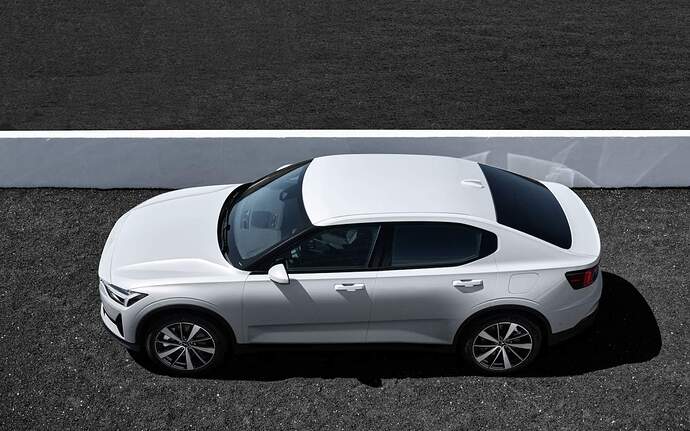 I don’t use public charging very often and in Australia the Supercharger network isn’t really as widespread compared to Chargefox & Evie. That advantage is getting smaller each month as more DC fast chargers get installed around the country. The price advantage isn’t applicable here in Australia as the SR+ and the Polestar 2 base model are the same price.

If you remove those two aspects (price & Superchargers) from the equation, a few reviews leaning towards the Model 3 would change their mind or be in the “undecided/personal preference” camp. 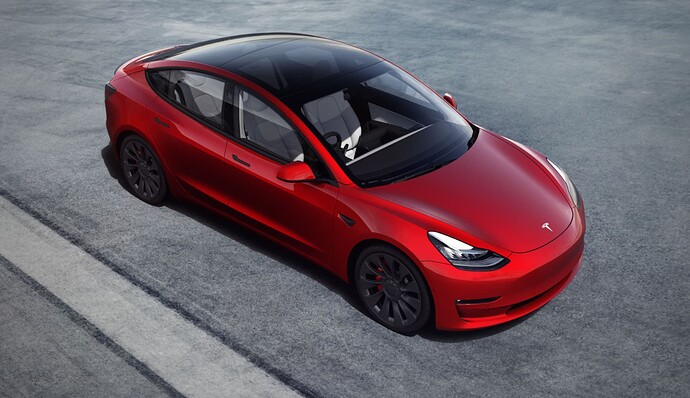 In the videos where the reviewer(s) can’t make up their mind, they often mention the Polestar 2 is better built, has a nicer interior and feels better on the road. Those are things more important to me than range and the charging network.

I won’t go into the specs head to head, as I’ve written about that previously for Which Car back when Polestar announced local pricing & specs: 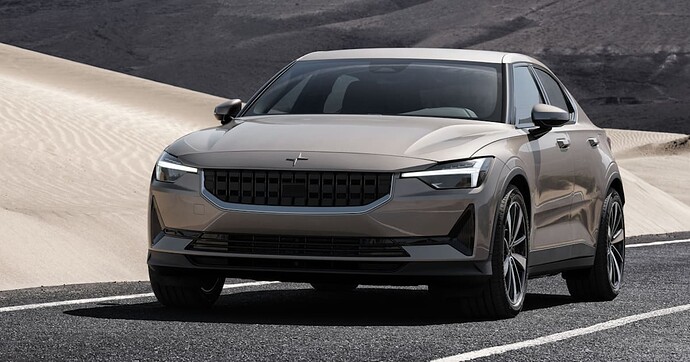 Does the Volvo spin-off performance brand's first offering in Australia have what it takes to unseat Tesla? 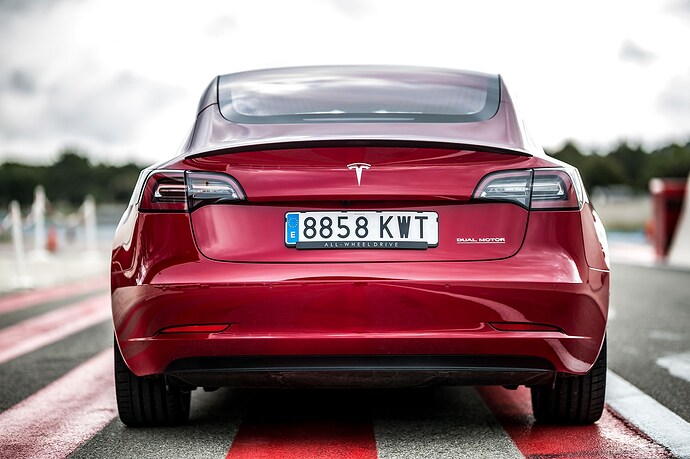 Incumbency. Don’t have to fuck around changing cars, getting new finance, then selling the Tesla.

Heat pump. Makes running the heater in winter use far less electricity. The Polestar 2 has a heat pump option but it’s in a $6,000 package with other stuff I don’t care about (glass roof, heated seats, premium sound system).

Cheaper. Finance would be $937/m for the Polestar 2 (white with the Pilot pack) compared to the $811/m I pay now. But I would be able to pocket around $10,000 cash as the difference betwen what I owe on the Tesla and what I could sell it for.

Faster. The Model 3 has more acceleration. 5.6s to go 0-100 compared to 7.4s in the Polestar 2. Not that it really matters to me day to day, but it is nice stomping the accelerator when joining the freeway or overtaking.

Supercharger network. It’s minor, but it’s nice having more options to charge when on a road-trip if the non-Tesla infrastructure is out of order or occupied (which happens).

Built-in dashcam. It’s not the best quality and only records 1hr of driving, but it’s free and included with the car and covers multiple angles.

Better ride quality. My main beef with the Tesla right now to the point it’s making me want to sell it.

No stupid glass roof. The glass gets really hot in summer and burns my head. I’ve tried using sunshades but they look tacky.

Better instrument display, infotainment. From what I’ve seen online I really like the Android based setup and CarPlay support is coming “Spring 2022” (i.e: any day now). The instrument binnacle in front of the driver is cool too, particularly the navigation map.

Proper door handles. Will make it easier for strangers and old people (my parents and in-laws struggle) to get into my car.

More road clearance from extra ride height. Steep driveways and whatnot will be a bit easier to manage in the Polestar.

More practical cargo area. No frunk, but I don’t use the Tesla’s frunk for anything except my charging cables and the hatch design of the rear cargo area allows for more flexible use compared to the sedan style trunk on the Model 3.

Easier to use controls. Wipers and lights have normal stalks. Air vents are normal manual ones. Glovebox has a normal handle the passenger can reach.

Fabric seats. I prefer fabric than the leatherette of the Tesla. Nicer in summer so you don’t get burned legs wearing shorts or a skirt. Not as easy to wipe clean though.

Free servicing for 5 years. The Tesla has no set service schedule, but I like getting my car looked at every now and then by a professional.

Safety tech. Blind spot monitoring alert in the mirror where it belongs, not a graphic on the screen where me eyes aren’t looking. 360-degree parking cameras & rear traffic warning when reversing. Tesla lacks this.

Easy to change cabin filter. I like to change mine quite regularly (or at least clean it out), and this is very easy on the Polestar. Pain in the arse on the Model 3.

Nothing to do with Elon Musk and Tesla fanboys. I can’t stand the guy, not driving around in something associated with him and the Tesla “community” is a positive to me.

Snuck in a test drive of the Polestar 2 this morning and thought I’d write a few words comparing it to the Model 3 before I forget.

I only had ~45 min with the car, but at least I was left alone to do it rather than have a salesperson watch over me. For reference the Polestar 2 variant I drove is the Single Motor, Long Range, with 20" wheels and the Pilot pack.

First impression when getting in the car is that the build quality is fantastic. Feels solid, lots of premium materials, looks classy. The seats are incredibly comfortable, nice and plush versus the Model 3 (which I find very firm) and with lots of adjustments, particularly thigh support. It’s simply a nicer environment than the Model 3 to sit in. 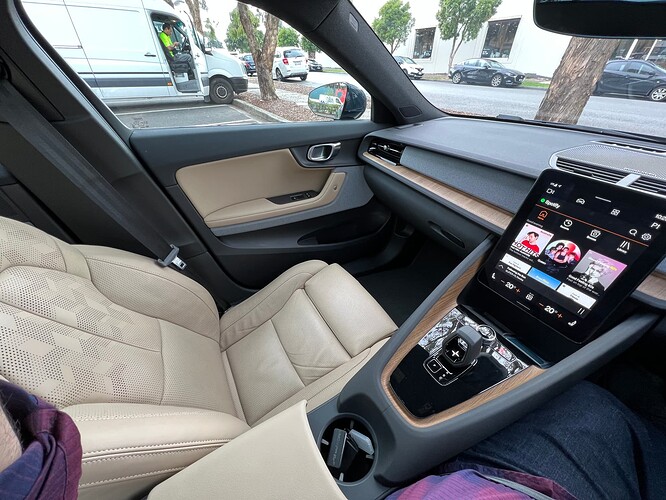 The Android Automotive infotainment setup (not Android Auto - they’re different things) is wonderful. Having Google Maps (proper Google Maps too, not a half arsed/cut down version) right in front of you giving directions is amazing - probably my favourite thing about the whole car. 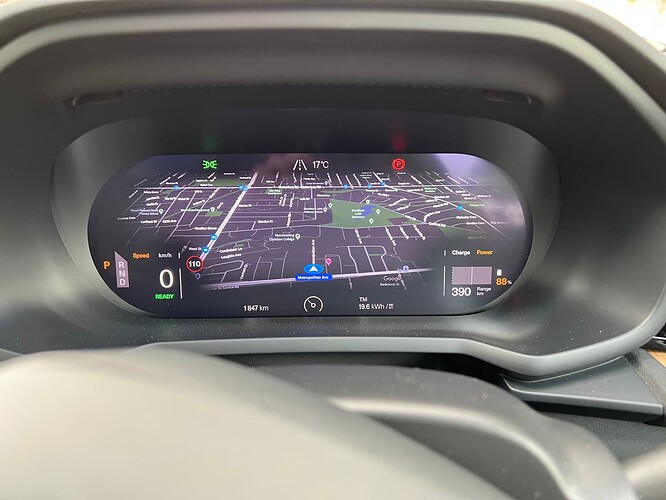 The bigger touch screen interface is very responsive and quick too. I wish there was more native apps, but Apple CarPlay/Android Auto is coming soon and the main apps I use whilst driving (Google Maps, Pocket Casts & Spotify) are already there. Google Assistant understands me way better than Tesla’s voice command setup. 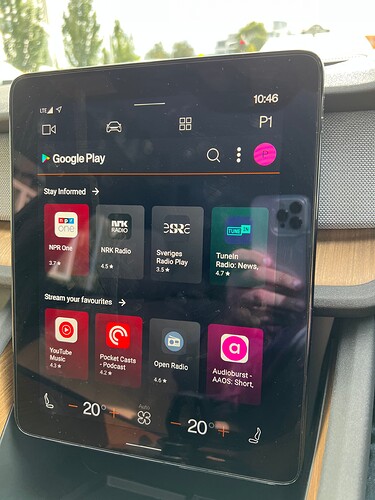 I like the practicality and common-sense approach to the Polestar 2’s interior and features compared to the Model 3. The glovebox has a normal handle the passenger can open. Lights and wipers are an easy to use stalk. The mirrors have blindspot monitoring. 360-degree parking camera is super handy. The door handles are obvious and easier to operate. The climate vents aren’t controlled via a touch screen and actually blow away from my hands on the steering wheel. Some people like Tesla’s approach, and I don’t hate it - but Tesla takes it too far. The Polestar approach is just the right amount of touchscreen stuff. 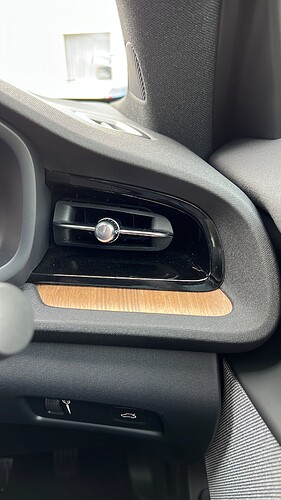 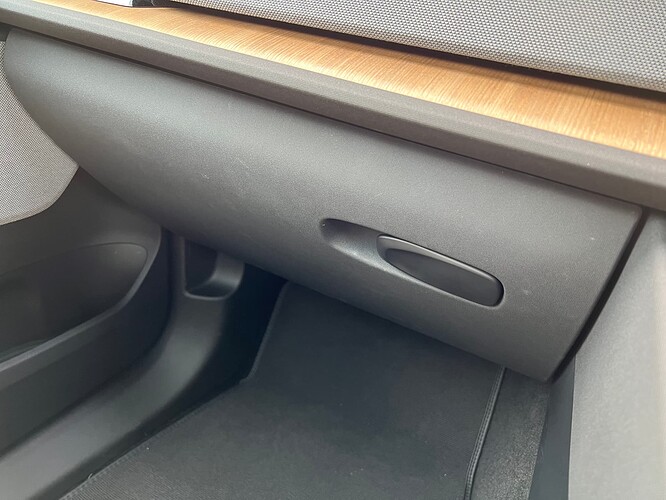 This is minor, but the slightly higher clearance of the Polestar 2 vs the Model 3 makes getting in and out of steep driveways a treat. It also makes entering and getting out of the car way easier than the Model 3, which is very low slung.

The ride quality is fine (a little smoother than the Model 3 and this is with the 20" wheels, which are supposed to be harsh), but the steering is very, very light. I had it set to Firm but it still felt loose to me. It’s very easy to manoeuvrer at low speed and it’s still very drivable, but lacks the response of the Model 3 that’s for sure. Not a fan and you’d get used to it quickly, but it was the first thing I noticed when jumping back in Model 3 to go home after the test drive. 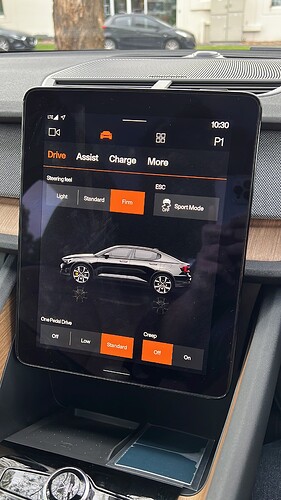 Quite slow throttle response. The Model 3 takes off like a rocket, even the SR+, and I know the 0-100 times of the Polestar 2 and Model 3 are different, but the Polestar 2’s initial acceleration just feels laggy, like I have to push the accelerator quite hard to get up to speed, then it takes off. I’ve driven other EVs that are slower on paper (Hyundai Ioniq, Nissan LEAF) and they aren’t like this either. It’s not awful and probably safer and more comfortable for passengers than the Model 3’s unbridled acceleration. 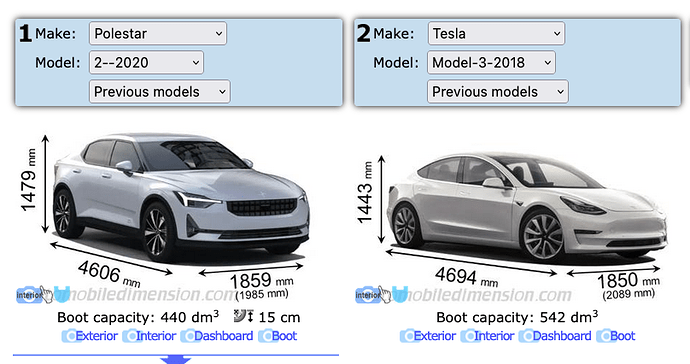 The Polestar 2 feels chunky. It’s not a bad thing as you feel very cocooned and the car isn’t a “boat” at all that lumbers around corners or is hard to park, but despite the Model 3 and Polestar 2 being almost identical in dimensions the Polestar feels bigger. Dunno why, maybe because it is higher up?

Visibility to the left is poor. I’m tall (186cm) and with the seat in the lowest position my view of traffic coming on the left is impeded big time. I have this issue in most cars to varying degrees, but the Polestar 2 is awful for front visibility. Driving in the left lane on the Eastern Freeway, I couldn’t see cars merging towards me until they were very close as the camera/rear view mirror cluster blocks my vision. This happened twice and is pretty shit. 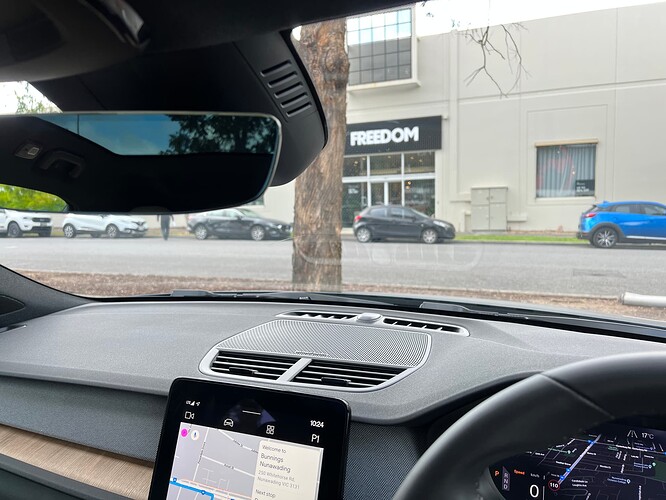 There biggest deal breaker is the massive centre console. It really impedes leg space in the driver’s area and was uncomfortable. There’s no way I could do a 1 hour drive, let alone a 2 hour drive sitting like this. This is one of the downsides of sharing a platform with a combustion engine car and the transmission I guess. 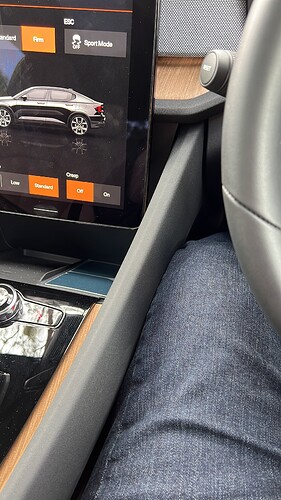 These two things alone ruined the car for me to the point where I wouldn’t buy one because of it. If my legs are squished and I can’t see out of it properly, why would I buy one? It’s a shame as everything else about the car is quite good. If you’re a smaller person than me you might not experience these issues and the Polestar 2 would be a great car to live with. Personally, I’ll pass.

Ping me on Twitter (@decryption) if you have any questions.