pfSense WAN Load Balancing not as fast as I expected

Any network experts around? I’ve set up a pfSense box to load balance two WAN connections to speed up BitTorrent/Usenet for a few days while I do some “backups” and I’m not getting the speeds I expected.

I’ve got a Dell R210 II running pfSense, configured with two gigabit WAN ports (1000/50 Aussie Broadband and 250/25 Launtel) and two gigabit LAN ports placed into a LAGG in LACP mode. The 2x LAN ports are hooked up to a switch (Juniper EX3300-48T) with LACP configured (ae0).

My client device is a 2013 iMac with an extra Thunderbolt Gigabit adapter attached. The onboard interface and the Thunderbolt interface are bonded and using LACP. Both those interfaces are plugged in to the Juniper switch on an LACP aggregated port too (ae1). 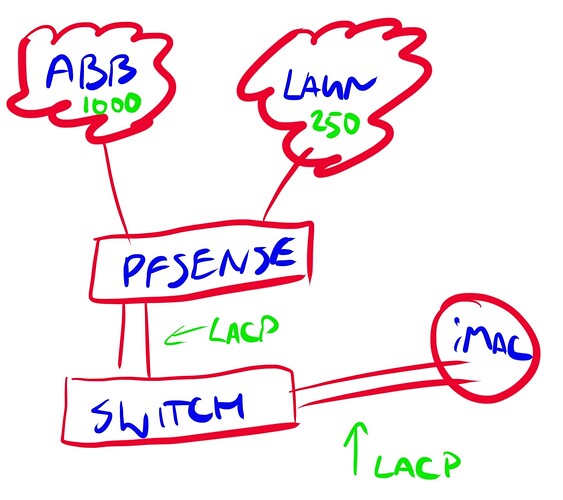 I’m guessing the problem lies with the link aggregation setup (be it on the switch or on the iMac) or something to do with the load balancing WAN setup on pfSense. I’m not sure what to tweak or even what to check to see what the issue might be!

Anyone done this before and got any tips for what I should be looking at on either the switch or pfSense to adjust so I can get more speed out of the Aussie Broadband WAN port when load balanced with the Launtel connection?

Just following up on this for my own reference - I found out why I could never get speeds above 600-650mbit. The NBN NTD is at fault.

I have an Alcatel I240G-R, which according to an expert on OCAU, “that version isn’t capable of a full gigabit of throughput at layer 3, regardless of across one port or multiple ports”. So when trying to use more than 1gbit, the unit shits itself and speeds slow down, but works fine at 1gbit as that’s all its designed for.

There is a more recent NTD that can handle more speed, but to get one you basically have to break your existing unit.

Slow clap for the NBN.