Amber Electric - is constantly changing wholesale electricity pricing worth it?

I've been using Amber Electric as my energy retailer since Feb 2020 and folks, it is good and cheap with pretty much no downside. I've saved a shitload of cash and even if you don't have solar you'll still benefit.

With a normal electricity retailer you enter a contract with a set price for supply and usage, often with different pricing based on how much power you use and what time you use it. Amber don't do this - they pass on the live wholesale "spot" price for electricity which changes every 30 minutes plus a $10/m fee for doing their thing.

The advantage of tapping in to the live electricity market is that when electricity is cheap, you, the humble consumer, benefits from paying wayyyy less than the fixed price from a traditional retailer - like 10c/kWh versus 25c/kWh. Being exposed to the live market also exposes you to pricing peaks, that when you're using a traditional retailer you're protected from as you have a contract.

Luckily, there's way more electricity gluts (cheap power) than there is electricity rationing (expensive power) and the times when electricity will be cheap or expensive are kinda easy to predict so you can plan your electricity around them to save money. For example, if the sun is out, turn on your dishwasher instead of leaving it until 6pm-8pm when power costs the most.

Solar exports are also at the whim of the market, but in Victoria all energy retailers have to provide at least 10.2c/kWh until the 30th of June 2021. This also means if the wholesale export price spikes, you don't get a piece of the action. It sounds shit but unless you've got a big stonking solar setup *cough*, you're better off with getting 10.2c/kWh all the time instead of the usually pissweak wholesale rate.

The best way to explain this is with some screenshots from Amber's smartphone app. It shows you the live pricing and can notify you if there's gonna be some super cheap electricity or a spike coming up.

Some of that pricing looks scary ($2.86 for a kWh of electricity!!!), but the spikes rarely last long or you can shift usage and 90% of the time, the price for electricity is cheaper than you'd get from another retailer, so it all evens out each month to a saving.

Amber also protects you from any insane spikes by promising "that you’ll never pay more than your state’s reference price for energy over the course of a year or we’ll refund the difference". In Victoria that means over the course of the year, the absolute maximum you'd pay for energy is the same as if you were on a retail provider using the Victorian Default Offer (which for me, in a Powercor zone, would be $1.2619/day supply and 26.40c/kWh for usage). 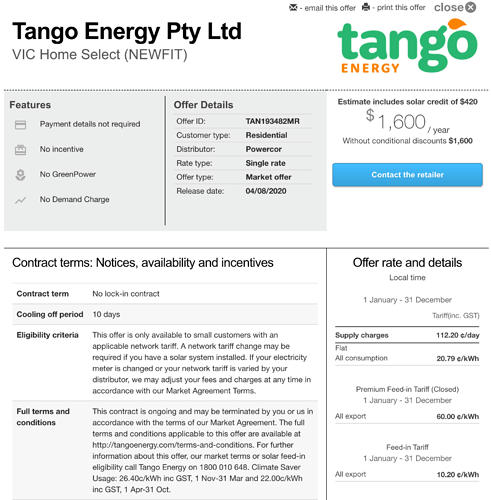 Here's my bills from Amber if you wanna look at how they calculate the wholesale price. 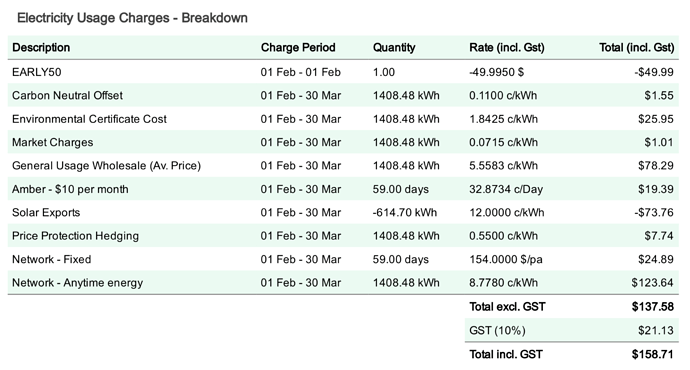 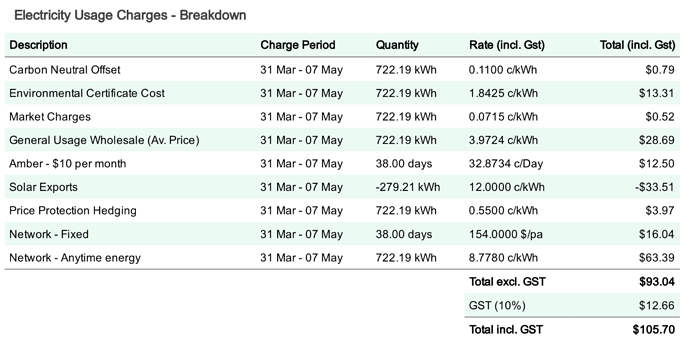 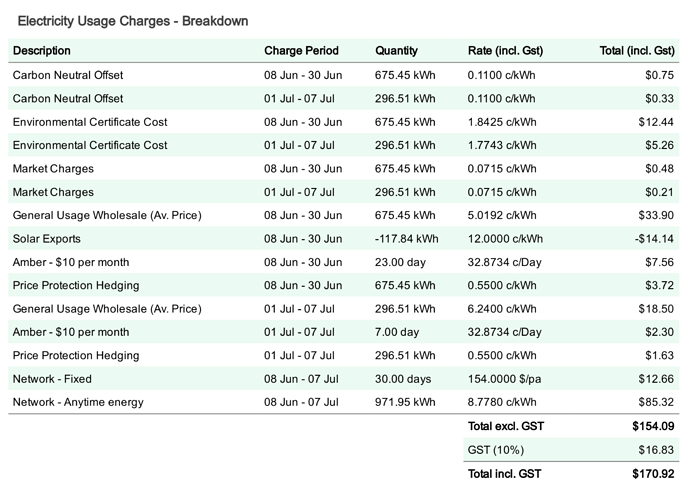 I didn't do much, if any adjusting of my electricity usage habits either. I glance at the app every now and then before I do something energy intensive that I know I can do later (e.g: charge my car later, put on a load of washing tomorrow, etc) if the price is a little high, but I was already used to doing that with solar.

One of the cool things about Amber that I'm too much of a noob to take advantage of is their pricing API. Yep, that's right, a bloody API that exposes the pricing for your account in real time. It's still in testing, but some people have done stuff with it, like this Apple Watch app, an MQTT relay and a basic Python interface.

In theory this means you could hook that API up to appliances to stop/start their operation when power is expensive/cheap. Some examples I'd love to play around with:

I'm pretty sure this style of usage is Amber's end-goal. The wholesale pricing stuff is nice and all, but being able to dynamically and automatically shift loads in sync with pricing (particularly in 2022 when the National Energy Market goes from 30-min to 5-min settlement) is quite revolutionary. The automatic bit is really cool as you don't have to think about pricing - software does it all for you!

Pair it up with a battery or an EV that can export to the grid and there's some great arbitrage opportunities. I admit this stuff is pretty nerdy so I don't recommend Amber to people who suck at planning ahead, but if you're the kind of person that thinks an API for your energy retailer is cool or are a tightarse like me, you'd definitely dig Amber.

Disclaimer: I have absolutely no connection to Amber Electric but they do have a referral program where we both get $25 if you sign up. If you like what you read here, use this link to sign up and we both benefit!