This is kinda boring and unrelated to my cinema install, but I think it’s super important to understand so you get the best out of any home theatre setup so I split it out into a separate post.

There’s so many formats for video and audio out there - which ones are good and which ones should be avoided?

COLOUR SPACE & DEPTH
Video 4K Blu-Ray discs and some streaming services like Disney+ and Netflix support the Rec. 2020/BT.2020 colour space and up to 12-bit colour depth, but no content makes use of 12-bit colour and I don’t think any 12-bit displays exist outside of high-end colour grading monitors. All the 4K Blu-ray discs on sale now have a max colour depth of 10-bit.

There’s also the DCI-P3 colour space, which is very common and what most titles achieve, which is lower than the full Rec. 2020 standard. I don’t think much, if anything goes beyond the P3 colour space. HDTVTest has a good video to find out if any 4K Blu-rays exceed P3

Most 1080p content like Blu-Ray discs and streaming services support the Rec. 709/BT.709 colour space and 8-bit colour depth. Still very nice looking and what most TVs and projectors support, but Rec. 2020 and 10-bit colour is a bit nicer. Most HD TV is BT.709 too.

HDR
Stuff like HDR10/HDR10+ and Dolby Vision are standards used to ensure a baseline of colour space and depth, but also add metadata in the signal chain to tell the TV or projector to make certain parts of the screen lighter or darker. TVs are way better at this than projectors as they can control the light emitting from individual pixels, so on a projector the HDR effects are less pronounced than on a good TV.

When you see “HDR10+” or “Dolby Vision” labels on content, even if your display can’t do all the fancy brightness control stuff, that content should also be in 10-bit colour and calibrated to the BT.2020 space, so will look nicer than usual.

This Engadget video does a solid job explaining all the HDR stuff:

AUDIO
Most content either has 5.1 or 7.1 audio, but lately there’s a thing called object based audio that does away with specific amounts of speakers and projects sound in a 360-degree stage that gets richer the more speakers you have. This quick video from Dolby explains the concept:

DTS and Dolby are the main companies making audio codecs for surround sound and they’ve got various codecs out there. Dolby Digital (AC-3) & Dolby Digital Plus (E-AC-3) for 5.1 audio and DTS-HD Master Audio or Dolby TrueHD for 7.1 audio being the most common formats I’ve seen. For object based audio, there’s Dolby Atmos and DTS:X. Atmos and DTS:X are not codecs themselves, they’re metadata streams that are usually added alongside TrueHD or DTS-HD-MA to tell the receiver where to play the audio in that 360-degree soundscape.

EQUIPMENT
The “gold standard” for content now would be a 4K Dolby Vision/HDR10+ video with Dolby TrueHD & Atmos/DTS-MA-HD & DTS:X soundtrack. These are relatively modern so need a playback device to match.

The easiest way is to get a 4K Blu-ray player and a 4K Blu-ray disc. It’ll work perfectly every time regardless of your computer setup or internet connection. Not all 4K players support HDR and Atmos though, so double check in the specs that it’ll support the good codecs mentioned earlier. Wirecutter recommends the Panasonic DP-UB820, which sells for around $520.

When using streaming services, there needs to be a few conditions met. The content actually has HDR & object audio, your internet connection is fast enough, your playback device supports it (the vast majority don’t, so double check) and the streaming service needs to not gimp it due to a pandemic - Netflix & Disney+ for example just didn’t stream HDR versions of their content to save bandwidth!

For the naughty pirates reading this, you need to get yourself an Nvidia Shield Pro. The Apple TV 4K and the new Chromecast with Google TV do not handle passing through the audio properly, as explained in this Plex forum thread and Infuse Pro forum thread. You can also use a computer and an app like VLC that’ll just pass the raw audio to your receiver via HDMI or S/PDIF

To get this sweet image and audio quality, you also need a reliable HDMI cable. Streaming uncompressed 4K 60fps 10-bit colour between your playback device and display can hit 18 gigabits per second. A shitty HDMI cable just hasn’t got enough copper in it or enough shielding to transmit that signal properly. The HDMI 2.1 standard is the latest and supports up to 48gbit/sec. This Wikipedia article explains all the differences between HDMI versions. The bottom line is get a certified HDMI 2.1 cable from somewhere reputable like Selby or Cable Chick and you’re set.

FILES
Finally, I thought I’d explain what to look for in a downloaded movie rip for the best quality file.

You want to get a “remux” of your preferred piece of content. Remuxes are the original Blu-ray disc, with all the extra crap stripped out, leaving just the original untouched audio and video files placed into an MKV container. No transcoding or manipulating of the video or audio. But even with remuxes, some versions don’t include the HDR or the Atmos/DTS:x versions of the audio! They strip them out and use the basic audio and video to ensure the file works on the lowest common denominator setups.

Here’s a rip of 1917 that keeps the excellent HDR10+ video and a HDR10 track (??), but only includes the old school AC-3 5.1 audio! Absolute waste of damn time. According to Blu-ray.com, the 1917 4K Blu-ray includes an Atmos soundtrack, so I will be looking for a different rip that includes Atmos. 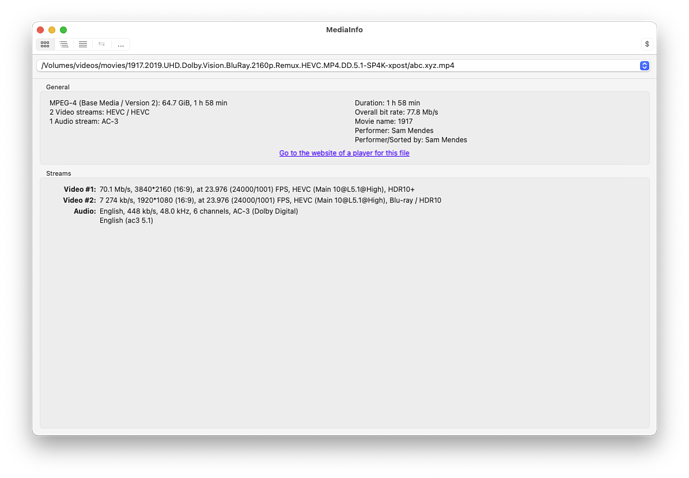 Here’s Alien from 1979, which also has a HDR10+ video track (nice), but the audio track is “just” 5.1 DTS-MA. In this circumstance that’s ok, as the original disc didn’t have Atmos or anything, 5.1 is as good as it gets for this title. 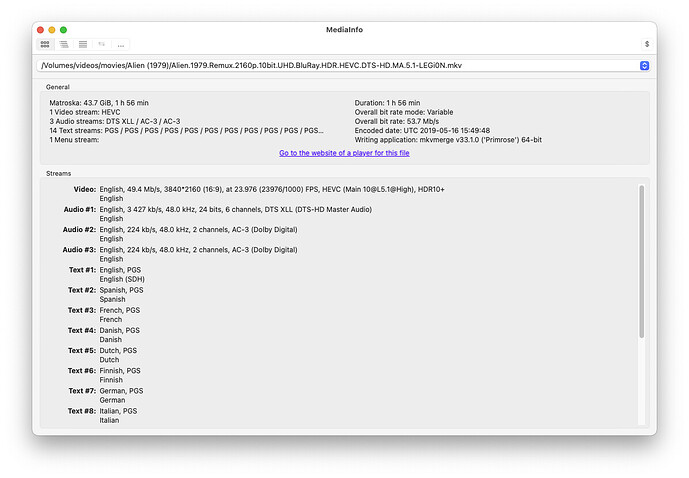 3:10 to Yuma uses a DTS:X track, which is an alternative to Dolby Atmos, confirmed by Blu-Ray.com. 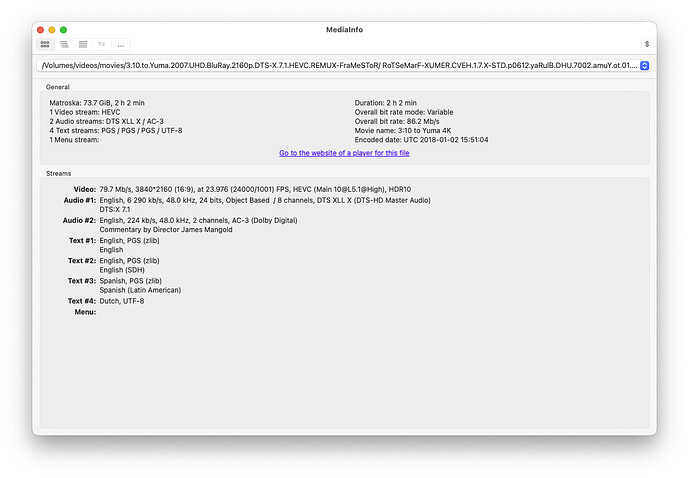 For a final example, Baby Driver has a HDR10 video track and both DTS:X and TrueHD/Atmos audio tracks. I’m actually not sure what’s going on here, as Blu-ray.com doesn’t mention a DTS English track… 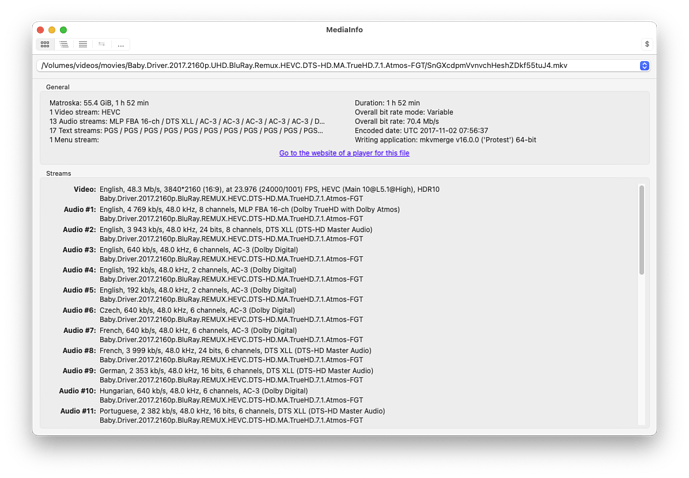 It’s worth double checking your rips before playing them, as the last thing you want is to get a lame version when there’s a better version out there to download!

A tour of my home theatre room